I liked his first person narrative voice from the perspective of 21 year old, Calypso (Kyle) Summers, a Nukunu man from South Australia. In some places it is a little too much- a little to forced. I do like that Calypso has lived through his own struggles with racism and addiction and now views the worth with a clear, mature head.

Thomas teaches important lessons as Calypso goes through some life struggles. It risks feeling like an adult ‘I told you so’ lecture but I think it balances the fine line well. Calypso faces many of the dilemmas that young Aboriginal men might face and we join Calypso in his head as he thinks through them all often with the help of his many mentors.

Calypso learns about the damage that cattle and sheep farming do to traditional lands as well as the dangers that mining poses “you don’t go ripping big holes in people’s country”. We hear a little about how the Stolen Generation separated people and their future families from country- the shame stopping them from returning. Thomas also gives us a perspective into the heads of those that are oppressed by depression, addiction and racism through Calypso’s cousin Run. We hear about the health issues that affect his people through Uncle Bruce.

I enjoyed watching Calypso’s relationship with Clare blossom, as well as how he recovers his relationship with his family back on country. I enjoyed reading the differences and similarities between all three families.
If you love cricket, you’ll love that the couple talk about it and attend a match towards the end of the book. It’s a nice tie in to a few themes throughout the book.

The two main twists that Thomas had built throughout the book are a little expected and pretty easily overcome for Calypso. The conclusion was a little flat.

In saying that, I ate through this book and enjoyed it. I’d happily read it again and recommend it, especially to young Aboriginal men 16-25, teachers and those generally interested in Aboriginal culture and YA literature. I’m left excited to read his newest release- Songs that sound like blood.
This isn’t a book that I would have usually picked up. I wasn’t immediately drawn to the cover and I have a little secret obsession with fantasy books (things like The Obernewtyn Chronicles by Isobelle Carmody and Ian Irvine’s The Three Worlds Cycle series). I’ve enjoyed having my eyes opened in recent years more to Australian YA like Lockie Lenard, Tomorrow When the War Began, Nona and Me. I’m excited to have books like Jasper Jones, Adventures of Cinnamon Girl, Deadly D and Justice Jones, Ubby’s Underdogs on my reading list! Stay tuned! 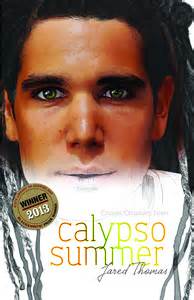 Have you also read Calypso Summer? What were your thoughts on the book? What is your favourite Aussie YA book so far?